When we discuss purchasing a solar system, it can be either in the form of an outright cash purchase, or some type of financing. Many people believe in true “ownership”, versus a third party owning the system on their rooftop (more discussed about that below). 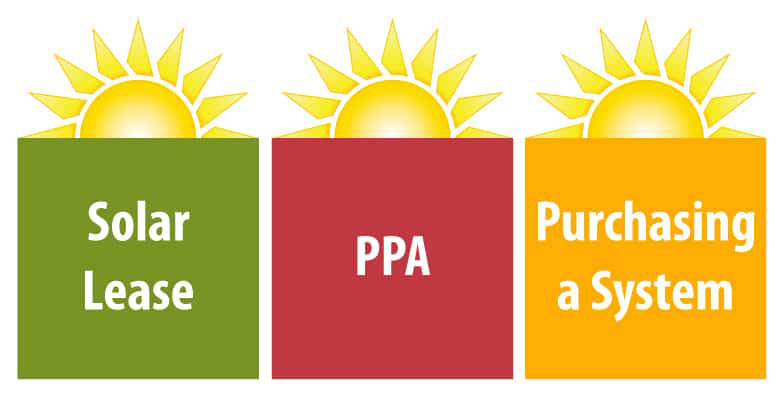 Advantages of purchasing a Solar System

Disadvantages of purchasing a solar system

What is a solar Lease?

In the early days of solar, say the mid 90’s, the only people that decided to go solar had cash or the ability to borrow money to go solar. Like a car lease in that there is very low upfront payment and a fixed term and at the end of the term you give the car back. In solar, the lease term, is generally 20 to 25 years, with a fixed payment during the term. The solar lease has an option of a fixed rate for the entire term, or a rate that includes a small escalator for the term of the lease (usually around 2-3%, but generally lower than the rate hikes of the utility companies). The upfront payment in a solar lease is generally ZERO, and the lease company provides a guarantee of power output, as well as insurance, maintenance, and any possible repairs. With the solar lease, the lessor owns the system as well as any tax advantages that goes along with it. Well known lease providers are SunPower and SunRun.

What is a solar PPA?

PPA is an acronym for Power Purchase Agreements. A 3rd Party purchases and installs the solar system, and you pay the 3rd Party for the power the system generates for a fixed period, usually 25 years. Like a lease, there usually is ZERO upfront payment. The 3rd party monitors maintains and insurers the solar system. Many people consider a PPA like that of your local utility company, in that you usually put no upfront payment, and pay for the power you use. Throughout the year, you will use more power in the summer for your swimming pool etc., so your bill will be higher in the summer months then generally in the winter months. with a PPA, you are only paying for the power your system actually generates. Like a Lease, the 3rd Party owns the system and receives any tax advantages that goes along with ownership. Well-known companies that use the PPA model are Sunrun and Sungevity.

Advantages of a solar PPA

Disadvantages of a solar PPA

7 Things to Expect During a New Roof Installation

HVAC Size and Installation: What You Neec to Know
Category
Archives
Get an Estimate